Maybe this is the bottom for the iron ore price cycle, the great red hope for Australia and the government.

Maybe a resurgent price will deliver a windfall for the government, boosting the budget and helping them to avoid the need for tax reform.

The simple fact is that the iron ore price jump relates to China’s massive surge in new credit over the month of January. China created a record amount of new debt last month. The figure was an astounding $525 billion.

This is not the first time the iron ore price has received a boost from China’s attempts to stimulate its economy. During the iron ore bear market that began back in 2011, the iron ore price had big rallies in 2012, 2013, and a lesser one in 2015.
This is just another episode. The bottom line is that the iron ore market is in structural oversupply. The only way to improve the structure is via a falling price.

So this bounce will be short-lived, like the others. That’s especially the case because China isn’t managing its banking system very well. Soon after the news of January’s record credit creation, rumours surfaced that China would reign in some of the banks.
One minute they’re lending too little. The next they’re lending too much. In a major worry for the ongoing build-up of risk in China’s financial system, apparently, 75% of January’s credit creation went to corporate borrowers, an already heavily indebted sector.
Given the ‘not too bad’ reporting season so far, there’s no urgency coming from any quarter. The fact that the share market is more than 20% off its highs, and still nowhere in sight of its 2007 peak, has more to do with an ‘irrational’ market than the stark reality of the situation.

But don’t forget, the earnings numbers coming through now are up until 31 December. The market has already factored these results in. It’s looking ahead now, into the second half of the year.

The fact that the main market index, the ASX 200, remains in a strong downtrend tells you the stock market doesn’t see an economic resurgence coming anytime soon. That could change of course, but if you have respect for your money, take note of what the market has to say about any self-serving ‘opinion’.
----------
Extract of the article published by Greg Canavan,
For The Daily Reckoning

Ashburton Crane Hire was called to the rescue to assist a Perth based mine and exploration drilling company. They needed vehicle and equipment lifted for some exploration drilling. The future WA mining project could not access the rear of the Perth property.

While based in Perth WA, Ashburton Crane Hire has its own crane transporter to get mobile cranes for hire to mine site construction/maintenance projects in Western Australia.

Ashburton Crane Hire can transport a crane to your WA mine construction site on time and within budget!

WA crane transport photo above from our crane hire video. Used for long distance Western Australian transporting of our big all terrain cranes on tracks.

Below is a photo of multiple Ashburton Crane Hire cranes at a Western Australian mine site construction project. 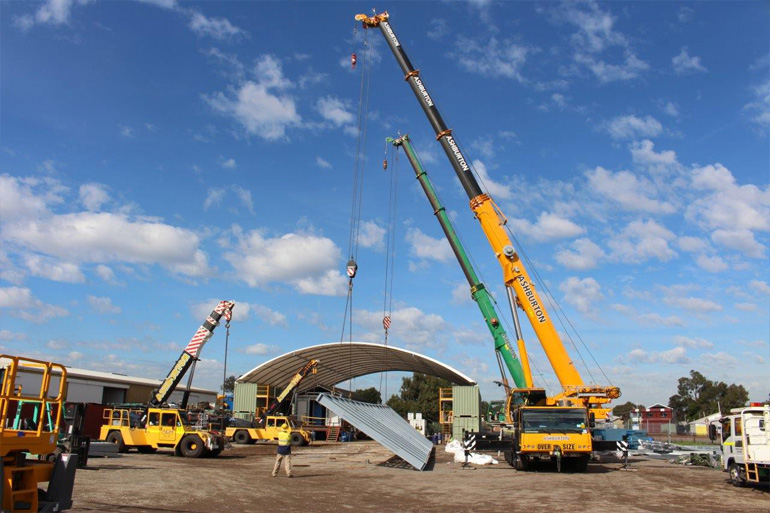 For long term crane hire at WA mining/construction sites we'll want to return our crane transporter to Perth to move our bigger cranes and all terrain cranes on tracks to sites about Perth. Therefore ACH can back load, long haul transport bulk mining equipment to and from Perth at discounted mining equipment transport rates.