WHAT'S CAUSED THE SLUMP IN BUILDING CONSTRUCTION IN WA?

Why have eastern states building approvals and government infrastructure construction increased while Western Australia has gone backward? The consensus from Western Australian political parties is the low share of the goods and services tax (GST) of only 34 cents for every GST dollar collected in WA. A bigger share of GST for WA would help stimulate the economy. This would likely include more WA government infrastructure spending which requires labour and things like cranes. More labour means the need for more housing, again stimulating construction demand. With the trend since the 1980's of Perth housing infill, especially along transport corridors, the need for building more high rise apartments increases. This, in turn, requires more crane hire. So too does infrastructure construction. The new Perth stadium required many mobile cranes during its construction including those from Ashburton Crane Hire.

In 2017 the total number of cranes seen in Perth's skyline went backward. 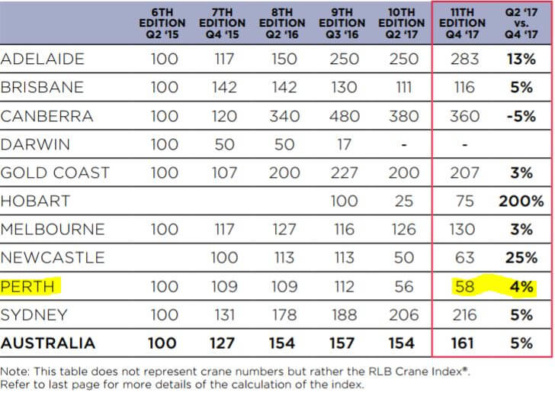 Crane spotting stats as an indicator of how Perth is going economically and the report by numbers show Perth is not doing well. The GST Western Australians pay is funding development in other Australian states. The number of cranes counted in a city skyline is an economic indicator that politicians need to be aware of and more importantly do something about. Building construction fuels construction jobs, confidence, interest, and infrastructure to affordably house more businesses and people in Perth.

The author has been around long enough to know the boom-bust cycles of the Western Australian economy. The City of Perth has plans for 62-story building construction in the Perth CBD.

View all posts by: ACH